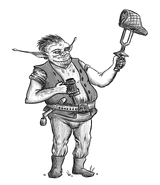 Art by Megan Stevens
Add a photo to this gallery

These short, long-eared humanoids are surprisingly fast. They burn calories at an alarming rate and can go from being pot-bellied to trim in a matter of days if they do not maintain their extremely high calorie diet. Despite only standing between 3’10 and 4’10, they have a commanding presence that cannot be ignored.

Glicks have wiry hair that starts farther back on their head than humans, and many have a pronounced widow’s peak. Thick fatty pads sit under their wispy eyebrows and make their faces very expressive. Their long, ragged, very thin, highly mobile ears are backswept but either stand up like little antennae or stand out to the side depending on the glick’s region of birth. They typically use their dexterous ears to accentuate their speech like many humans do with their hands. They have a wrinkly, small, leaf-shaped snout on their face. Males grow small protrusions in their mouth that are actually vestigial tusks but now are little more than large teeth. While female are almost entirely hairless, the exceptions being eyebrows and head hair, males have heavy body and facial hair (it is in fashion to shave it however). They have stout forms with small legs. They possess the normal allotment of fingers and toes but they are proportionally stubbier and fatter than a human's. While most glicks have either an off-white, tan, or brown skin coloration, some have patchy skin that may be a mixture of any of the proceeding two or three colors. Their eyes have black sclera with yellow iris. The color of their iris varies from a near white to a dark goldenrod color and the more yellow they are, the more fertile the glick is believed to be.

Culturally glicks are rough, brash, lewd, but honorable folks. While they may enjoy a drink or two (or eight) they still always endeavor to raise a toast to a friend while doing so. They are good natured and, while they may be exceedingly blunt, honest. Famously, glicks don’t hold grudges. They are a people who forgive and forget quite easily. They expect the same from other races and rarely understand the rationale for longstanding feuds or biases. However, glicks also have a legendary temper that is quick to be brought on but even quicker to subside. Status is symbolized by wealth, and glicks love their creature comforts. Their homes are always packed to the brim with accoutrements to help them relax and just decompress. A glick’s house also has a staggeringly large pantry, sometimes consuming 1/3rd of the total square footage.

Thanks to a powerful olfactory sensitivity and an even more powerful need to eat, glicks love cooking. Their food is generally served in large vats, has very high calorie levels, and is very nutritious but generally simplistic (rarely containing 2 or 3 ingredients). Food is celebrated in glick culture and it is considered a serious offense to waste food. A social faux pas derived from that social stigma is that a person must always finish all the food on their plate. While outsiders are partially excused from this restriction, glicks still find a wasted leg of lamb to be a terrible thing.

Many glicks are farmers, which is due to the staggering amount of food a glick must consume. They have developed rich and unique techniques for causing crops to yield larger than average tonnage per acre and these secrets are the envy of the agricultural world. There’s a saying: “If a glick isn’t a farmer, he’s a criminal -- and if he isn’t a criminal or a farmer, he’s a businessman, and that’s worse than either of those.” Glick merchants are notoriously shady and will pretty much sell anything to anyone, political implications be damned. Glicks are often found on pirate or smuggler crews, in organized crime rackets, or working in other illicit professions. Any glick who earns an honest living resents this and takes great offense to the stereotype.

Glicks are amazing runners. No one believes it until they see a glick go zipping by, and then they eat their words. Their biology is impressive -- forged in an environmental crucible unlike any other. They grew up on the savannah, faced with predators and prey that could far outpace a man. Over the generations only the fastest glicks survived, but to compensate they required more and more food to keep up their physique. This led to a genetic arms race that turned the unassuming glicks into well-tuned running machines. Glick races are a popular spectator sport that other races enjoy (though they are quite rowdy).

• The Book of Experimental Might. Copyright 2008, Monte J. Cook. All rights reserved.

Retrieved from "https://lrgg.fandom.com/wiki/Glick?oldid=341"
Community content is available under CC-BY-SA unless otherwise noted.